4 Ways to Prepare for the Next Economic Downturn Today

Economic downturns test the mettle of many small businesses. Those who normally enjoy comfortable profit margins are hard-pressed to stay ‘in the black.’ Some businesses cannot withstand the pressure and eventually close down. Whatever your situation, don’t fret… even the smartest businesspeople have suffered along with their customers when the economy slows down. It’s the degree of suffering which determines the good from the not-so-good businesspeople.

Thankfully, it looks like we’re slowly recovering from this last downturn.  People are beginning to invest in their homes once again, and you’ll be able to get business back to normal.  However, life has a way of repeating itself.  It may not be for another 10 or 20 years (hopefully, much longer), but another economic downturn will happen… it’s a certainty… So, it’s time you prepare for it now, so that you see a minimal impact!  (It’s true… some businesses still thrive during downturns – it’s possible, but that’s another story…)

How do you prepare for a downturn?

Those few, little changes will help you prepare for the next economic downturn… and you’ll find you’ll enjoy a better business immediately!

Plan for Your New Year Budget & You’ll Plan For Success 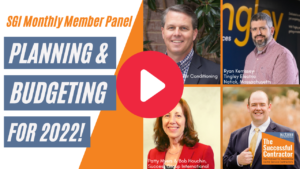